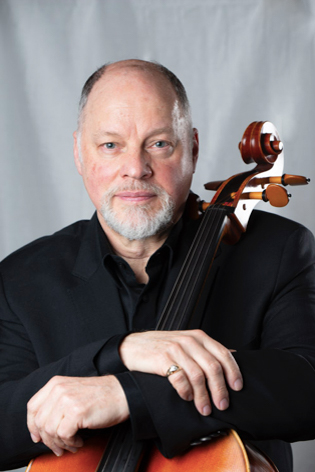 Eric Wilson, Associate Professor of Cello at the University of BC, was  awarded the Bronze Medal (1971) in the Geneva International Competition and co-winner of the Morris Loeb Prize for Strings (1973) at the Juilliard School. Eric Wilson was solo cellist of the Ensemble of New York in residence at the Lincoln Centre, New York. He was also a founding member of the Emerson String Quartet that won in 1978 the prestigious Walter W. Naumberg competition Prize for Chamber Ensemble.

With pianist Patricia Hoy, Professor Wilson has performed extensively and received critical acclaim with the release of their CD of Rachmaninov’s Sonata for Cello and Piano and Stephen Chatman’s Sonata for Cello and Piano. In March 2004, Wilson gave a series of masterclasses and recitals in Taiwan including lectures at the National Teacher’s University in Taipei and a recital at the Taiwan National Theatre, also in Taipei.

Wilson was born in Winnipeg, Manitoba to a family of musicians. His father, baritone Kerr Wilson, and pianist mother Thelma, had their own radio program on CBC while still in their teens. As a boy, he performed from memory with his brother Carlisle and sister Kerrine. His niece Kerri Lynn Wilson has an international career as a conductor. Why so much music from this Winnipeg family? “Beats the heck out of freezing!” as Winnipegers would say.