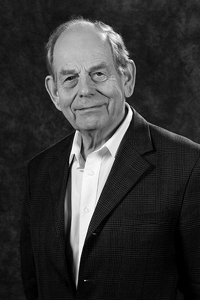 Ian Hampton was born in London.  Educated at Bedales School in Hampshire, he studied cello with Joan Dickson in Edinburgh, with William Pleeth at the Guildhall School of Music, London and with Paul Tortelier in Paris.  He was a founding member of the Academy of St. Martin-in-the-Fields and a member of the London Symphony Orchestra.  He became the cellist of the Edinburgh String Quartet.  Ian emigrated to Canada via Berkley, California where he taught for a year with his father, the renowned cellist Colin Hampton.  In 1966 he was appointed principal cellist of the Vancouver Symphony Orchestra and also of the CBC Vancouver Chamber Orchestra.  He was a founding member and cellist of the Baroque Strings of Vancouver and also the Purcell String Quartet.  In 1968 he became founder and president of the Vancouver Cello Club.  He taught at the University of British Columbia and was a member of the Masterpiece Piano Trio, conductor of the Nanaimo Symphony Orchestra and the Surrey Youth Orchestra.  In 1979 he became principal of the Langley Community Music School and, in 1982, principal cellist of the Vancouver Opera orchestra, both positions which he continued to hold until 2000, along with his role as principal cello of the CBC Vancouver Orchestra.  Ian has played numerous recitals and CBC broadcasts and has appeared as soloist – in the Britten Cello Symphony, the Rodrigo Concierto en modo galante, Morawetz’s In Memoriam Martin Luther King with the CBC Vancouver Orchestra and the Elgar Cello Concerto with the Vancouver Symphony Orchestra.

Ian feels strongly that his best work has been associated with what might be called ‘musical pioneering’ – for example his work with the Purcell String Quartet and the Langley Community Music School – and that more attention needs to the paid to works by 20th century composers.  His playing is “marked by sensitive musicianship, a superb tone, and a commanding technique; he is versatile, as at home in late 17th century works as in those of later periods, although he expresses a particular fondness for pieces from the first half of the 20th century.”

In 1999 Ian received the BC Arts Council award for his extraordinary contribution as a performer, teacher and administrator.  In recognition of his contribution to Canadian new music, in 2009 he was named a Canadian Music Centre ambassador.  In 2011 Ian was awarded an honourary doctorate from Simon Fraser University.