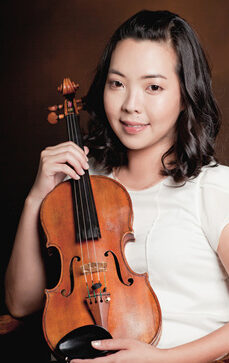 Huynjung Julia Lim, a native of Seoul, Korea, began her musical studies under instruction of Prof. Mikyung Park and Prof. Hyunmi Kim. While attending Sunhwa Art School in Seoul, she has won second prize in Eumyeon Music Concour. At the age of thirteen, she has made her solo debut with Hungary Symphony Orchestra. After moving to Vancouver, she had continued her studies with Aurthor Polson, Andrew Dawes and Paul Klings.

Huynjung Lim achieved her Master’s degree at UBC under Professor Jasper Wood and Bachelor’s Degree at McGill University under instruction of Professor Ellen Jewett and Mark Fewer. Upon entering both school, she was offered an entrance scholarship. While she was studying at UBC, she was selected to perform for Prince Edward’s visit to the school. She also performed for Stephen Harper’s visit to BC. In 2011, she was invited to play with KBS symphony orchestra for international musicians Festival.